A stingy Treasury and hasty capitalists are creating unprecedented pain!

Covid-19 is striking us the working class hard, and deep. The 2% decline in the year-on-year GDP for January-March 2020, just announced by StatsSA, is just one gloomy temperature reading, with nearly all genuine indicators of South African capitalism’s health also cause for despair. And the basis for the ongoing celebration in Sandton – the restored stock market valuation, mainly using worker pension funds to bubble up the Johannesburg Stock Exchange casino – is just another indication of the deranged character of our economy.

We are worried that this is the beginning of what will be seen as the Greatest Depression, one unprecedented in our history. And worst of all, we have neoliberal conmen at the helm, who pretend they care about society but instead are responding favourably to South Africa’s greediest businesses, and brutally to the rest of us.

This strategy of state and capital – combining stinginess and life-threatening working conditions – is bearing a poisonous fruit. It will kill many more. As evidence, we have just received official statistics revealing not only the ongoing decline in output (GDP) but also the rise in already sky-high unemployment and the complete collapse in business confidence.

Yet there are two soaring counter-indicators: the stock market’s recovery – April-June witnessed a 22% rise in the FTSE/JSE Africa All Share Index (the highest of any quarter since 2001), and a stunning trade surplus, after a rise in exports in May of 96%. The sectors that were exporting much more than in April were machinery and electronics (427%); vehicles & transport equipment (221%); base metals (182%); precious metals & stones (162%) and mineral products (79%). We salute these workers for their productivity, but we are terribly concerned about their health – especially since so many are working under adverse safety and health conditions.

What this means is that ultra-capitalist forces within the state and business are completely out-of-control. The first, in Treasury, fibs about budget austerity, and the second is intent on harming society by an excessively rapid return to work alongside a financialisation craze unrelated to the real conditions of the economy.

When the lockdown was eased on 1 June, SAFTU and our allies warned that in sector after sector, extreme levels of corporate haste would result in mass deaths. In the economic heartland, the rapid rise of Covid-19 cases began on 11 June, just the time period that the virus would require to take off in unhealthy workplace conditions, or in travel to work in unsafe circumstances. After having flattened the curve, the sudden explosion of cases and soaring death rate can be attributed to capitalist haste to open the economy. 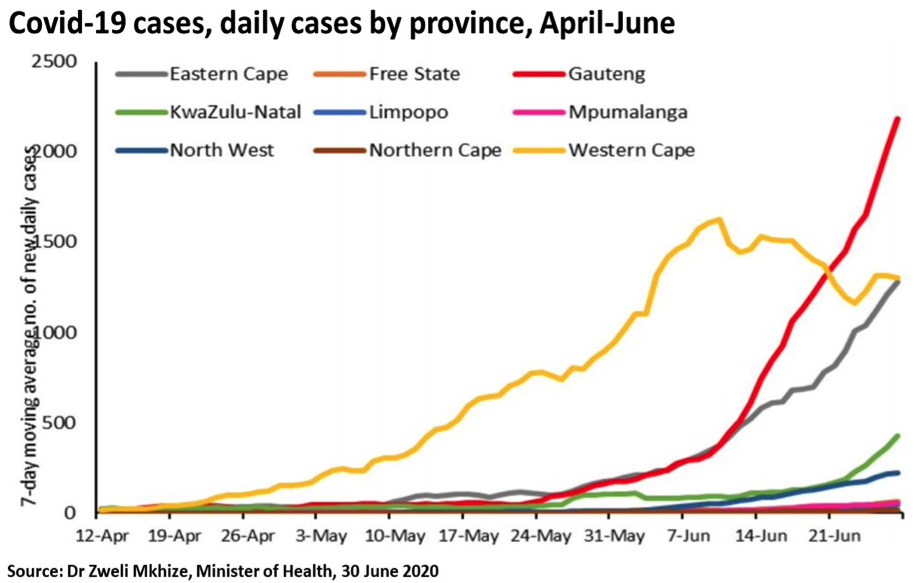 With the economy in such wretched shape, this is exactly the time for state agencies to give forbearance. But as our allies in the Institute for Economic Justice and Budget Justice Coalition have testified in parliament and in public statement in recent days, the Treasury’s claim that it has dedicated R500 billion to fiscal stimulus is an overestimation by more than ten times. SAFTU endorse their submission to parliament.

Further calls for unity between all trade union federation and between the trade union movement and working class formations to resist the brutal austerity programme announced by the Minister of Finance. Without this unity the working class will continue to carry the burden of a crisis it did not create.

To make matters worse, just as Covid-19 soars across the country, and as the winter cold penetrates impoverished and working-class households, we are told energy costs will rise by 50% in coming weeks, due to the National Energy Regulator of South Africa failing to discipline the corruption-riddled power supplier, Eskom. That supposed delivery agent of an essential service is seeking profits so badly – to cover past corruption following state capture by Hitachi (through Chancellor House) and the Gupta empire – that it is engaged in mass disconnections of black working-class townships across Johannesburg. This is occurring even if customers have paid their bills simply because they live in an area of high default rates – and indeed the inability to pay bills is now a constant refrain in poor and working households.

At the same time, municipalities like eThekwini and Cape Town are using the presence of massive army deployments and brutal police to displace low-income informal settlement residents, especially if they are affiliated with groups like Abahlali baseMjondolo and the Housing Assembly.

Together with intangible crisis conditions, such as rising misery and gender-based violence, the Covid-19 era is already the worst in our society’s memory.

This is exactly when a genuinely nationalist government would dramatically raise funds for those debilitated by Covid-19, and make available more tens of billions of rands to revitalise the health service. This is the time when, like Spain, the nationalisation of private health care would be the only logical response to the threat of U.S.-style fragmentation caused by an over-bearing for-profit sector and crumbling public sector. This is an opportunity long overdue to address the vast unmet basic needs in society, as witnessed by the housing and water fiascos in which even the roll-out of urgently-needed water tanks to permit hand-washing has been soiled by ruling-party and private-sector corruption. This is the moment to start rapid decarbonisation in a job-creating manner, helping all our vulnerable metalworkers, mineworkers, tourism employees and others in high-polluting industries to have gainful employment in a much more vibrant economy. All this offers the urgent rationale for careful delinking from a world economy which has left us fatally vulnerable to the whims of global trade, foreign direct investment and especially finance – such as tens of billions of rands worth of corruption-lubricating loans such as from the World Bank, China Development Bank, African Development Bank, European financing agencies and BRICS Development Bank.

Why would Treasury need to go to the IMF for $4.2 billion, if much more than this – amidst South Africa’s $185 billion total foreign debt – qualifies as Odious Debt, in which the multilateral development banks helped our state-owned enterprise to join forces with the Guptas and other ethically-challenged capitalists, leaving us all the poorer – and in the case of millions, with electricity disconnections now on Eskom’s agenda as bills become unpayable?

Beyond an urgent debt audit to identify which debt is Odious, all of this can all be financed through cracking down on the R170-R400 billion in annual Illicit Financial Flows, through imposing tighter exchange controls, through the Reserve Bank lowering the interest rate (the prime rate is still over 7%), through judicious Reserve Bank direct financing of the state, through raising the corporate tax rates back to where they were when South Africa was liberated (50%+), and through ending the wide variety of pro-corporate, pro-rich loopholes (such as medical aid tax relief). An agenda for genuine

In all these ways, SAFTU and our members are fighting locally, provincially, nationally and globally. Our solidarity goes out to similar struggles for justice in repressed Brazil and other sites of Latin American resistance, to racist America now witnessing unprecedented uprisings, to a Europe also suffering from rising fascistic forces, to occupied Palestine to a Middle East trying to emerge from under the boot of imperialism, to an India and China whose chaotic elites are nearly at war with each other – and certainly at war with their peoples.

As the Arctic temperatures have surpassed 38 degrees Celsius in recent days, all these campaigns for social and economic justice will fade into the history of an extinct species, humans, unless we take the crisis we face and turn it into an opportunity to reboot this country’s economy. If we consider our addiction to carbon in comparison – as per person emissions per unit of GDP – only two countries with more than ten million residents (Kazakhstan and the Czech Republic) are higher.

So, as Covid-19 hospitalisations rise to levels that are quite clearly breaking the health system, and as the death toll soars, the urgency of a full-fledged rethink of where we are and what we can do has never been greater. Will Treasury and the careless capitalists who have wrecked the society’s flatten-the-curve sacrifices not understand the need for them to get out of the way, finally?!